The impressive legacy of the Art Bank’s print programme

In the 1970s, the Canada Council Art Bank’s little-known Commissioned Print Programme wove its way across the country, connecting artists and arts professionals in unforeseen ways that would leave an impressive legacy.

To bulk up its newly created collection, the Art Bank commissioned 25 artists to produce prints at studios across the country that could then be rented out. This matchmaking scheme paired artists with printmaking studios, sending artists in and out of province to produce new works.

The scheme also helped build networks as these artists, from different artistic and cultural backgrounds and at different points in their careers, were given free creative reign at studios in Kinngait (Cape Dorset), St John’s, Halifax, Montréal, Toronto, Winnipeg and Banff, among other places. The studios would host the artists, provide them with studio space and resources, and introduce them to the local artistic community. 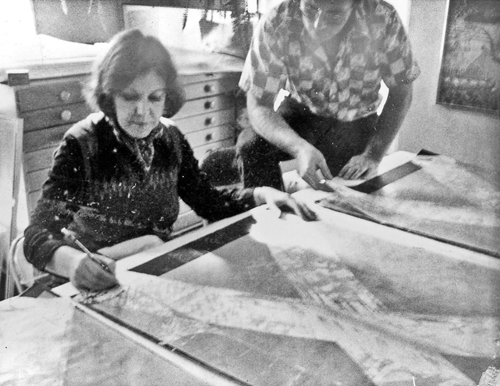 The resulting lithographs and silkscreens were divided between the artist, the Art Bank, and the printmaking studio. Few records remain of the Commissioned Print Programme, however personal correspondence between the artists, the studios, and the Art Bank demonstrate how it facilitated the creation of personal and artistic connections across the country.

To commemorate the Commissioned Print Programme, the Art Bank collaborated with the online platform Google Arts & Culture to showcase a selection of nine of the original prints produced at the time. Captured with the Google Art Camera, a global audience can now zoom into the fine detail of each work and learn about Canada’s trailblazers of contemporary art.

Frenkel included the X shape extensively at this time.  In the catalogue for her work, The Big Book - which features two of the four sections of Big X Window, Frenkel includes a narrative called “X is a Window”.  In the story, she explains how X can mean two things at once: an X on a window points to the access and the barrier at the same time. "You see through the glass/you are barred from what you see." 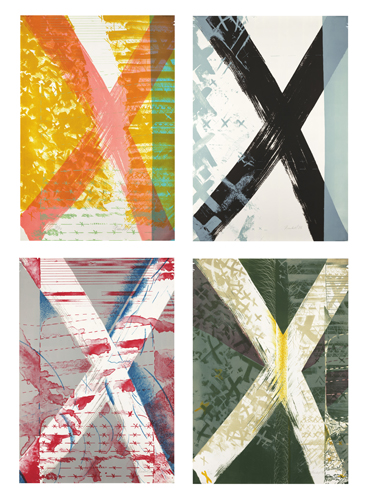 Takao Tanabe
Takao Tanabe has long produced landscapes in both paint and print. Over the years, his landscapes transformed from abstract and hard-edge geometric compositions to semi-abstract landscapes.

From the 1970s, the subject of Tanabe’s works seems to have settled on Canadian landscapes and, in particular, the West coast and the prairies. His first sight of the prairies may have been as a teenager working on a Manitoba prison farm, interned with his family and thousands of other Japanese Canadians during the Second World War.

Over time, Tanabe eliminated all references to the specific in his compositions, and especially human intervention on the land, focussing instead on wide horizons where light permeates land and sky. When Tanabe participated in the programme, he was employed at the Banff School of Fine Arts, where he produced three different lithographs for the Commissioned Print Programme: Rocky Mountains/Wenkchemna, Prairie Morning, and Prairie Dusk. 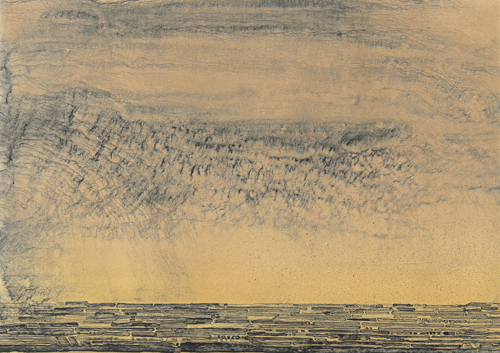 Joyce Wieland
In 1977, Joyce Wieland travelled to Kinngait (Cape Dorset) for the first time. It was there, at the West Baffin Eskimo Co-op, that she produced a lithography featuring Inuit artist Sorosiluto Ashoona as part of the Commissioned Print Programme.

Wieland, who worked as a painter, mixed media artist, and experimental filmmaker, was already widely recognized at the time, and she would go on to become a major contributor to contemporary visual arts in Canada. Several years prior, in 1971, she became the first living woman to have a solo exhibit at the National Gallery of Canada. In her work, she explored the intersections of identity, gender, nationalism, and ecology with attention to the traditional work of women.

Her decision to represent Sorosiluto Ashoona demonstrates her keen interest in Indigenous identity in relation to the land, both physical and political. The connexions she made during her first trip to the Arctic would be influential in her work and career. She would return two years later to produce a similar print, again featuring Sorosiluto. 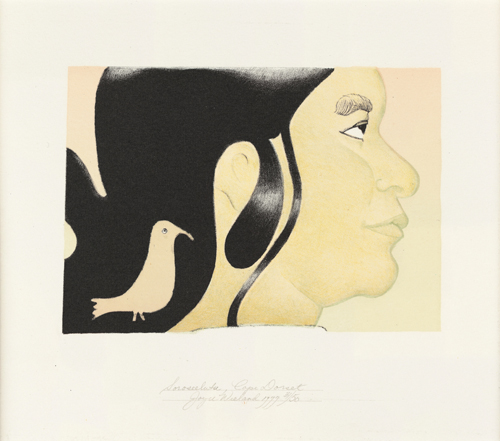 Barbara Alexandra Hall
In 1970, Barbara Alexandra Hall and Richard Sewell founded Open Studio, an artist-run studio and exhibition space in downtown Toronto that continues to be a hub for cross-pollination in the arts. Hall’s participation in the print programme sent her to Moosehead Lithography Press in Winnipeg, Manitoba, a print studio which had just recently opened its doors.

Hall produced Shadow Bands: a non scientific print at the Moosehead Lithography Press and also had the opportunity to collaborate with a fellow print shop manager. Barbara Alexandra Hall’s legacy lives on at Open Studio and in the vibrant network of artist-run centres across the country. 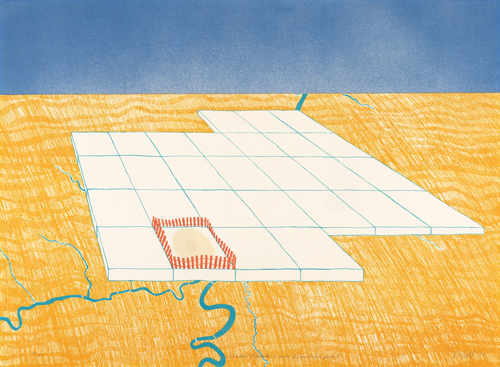 About the Author: Sonia Poisson
Sonia Poisson is an Operations Officer at Canada Council for the Arts and a freelance researcher specializing in anthropology of art. She has an M.A. in Visual Anthropology from Goldsmiths College, University of London and an M.A. in Art History from Carleton University. She works on various historical and arts-related projects for television, documentaries and museum exhibits.  Sonia researched the Art Bank Commissioned Print Program in 2017 as part of her studies at Carleton University.