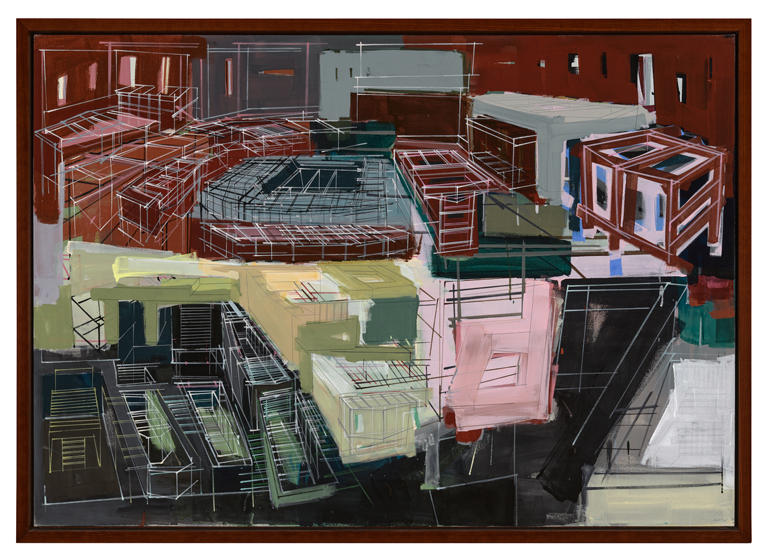 The exhibition draws from all parts of the contemporary Canadian artist’s career and explores her captivation with the architectural and social structures that order human society. The imagery in Thomasos’ art is inspired by the diverse cities, towns and villages she visited during her travels around Africa, the Caribbean, Asia and South America. Scenes range from industrial shipping yards to maximum-security prisons, urban high-rise blocks and the warp and weft of Caribbean textiles.

In an artist statement written shortly before her death in 2012, Thomasos explained how she chose the subject matter for her artworks:

“I was struck by the premeditated, efficient, dispassionate records of human beings as cargo and also by the deplorable conditions of the slave ships—so many Africans stacked and piled into the tiny, airless holds. In my artworks, I used lines in deep space to recreate these claustrophobic conditions, leaving no room to breathe. To capture the feeling of confinement, I created three large-scale black-and-white paintings of the structures that were used to contain slaves—and left such catastrophic effects on the black psyche: the slave ship, the prison, and the burial site. These became archetypal for me. I began to reconstruct and recycle their forms in all of my works.”¹

Born in Trinidad in 1964, Thomasos is best known for her large-scale, semi-abstract paintings. She immigrated to Canada in the early 1970s as a child, settling with her family in Toronto. As a Black person in a largely white education system, she struggled with feelings of isolation and a lack of accessible information about her history and culture. Her need for self-expression drove her interest in painting from an early age. Thomasos gained prominence in the 1990s, when she exhibited extensively in Canada, the United States and internationally. Tragically, she died in July 2012 at the age of 47 due to complications related to a routine medical procedure.²

Denyse Thomasos: Odyssey will be on view from June 14 to September 26, 2021, virtually at first and in person after the McMichael reopens.