Throughout 2021, Mexico will mark a number of significant historic events. From the foundation of Mexico Tenochtitlán (1325), to the fall of the Aztec Empire (1521), to the dawn of Mexican Independence (1821), Mexico is inspired to reflect upon, honour and share its heritage with other nations.

Aiming to foster cultural exchange, spark conversations among artistic communities and celebrate the cultures of Indigenous peoples, the Canadian Embassy in Mexico has invited the Canada Council for the Arts to showcase the work of Indigenous artists from Canada as part of “Casa Canada Oaxaca”, which will present Canadian artists at the Museo Textil de Oaxaca from September 20 to October 8.

Eight pieces created by Inuit women, all born in northern Arctic regions, have been selected for digital presentation at the Museo Textil de Oaxaca. Four of the works are featured here. These works are all part of the Canada Council Art Bank collection, the largest collection of Canadian contemporary art in the world.

This spotlight on Inuit artists and makers is part of a year of programming leading up to the third international Arctic Arts Summit, which will be co-hosted by the Canada Council and the Government of Yukon in Whitehorse, Yukon, in June 2022. Described as a summit for the North, by the North, the 2022 Arctic Arts Summit will bring together artists and those involved in cultural fields from Arctic countries and Indigenous Nations to strengthen the Northern arts sector and expand circumpolar cooperation through artistic and cultural connection and exchange. 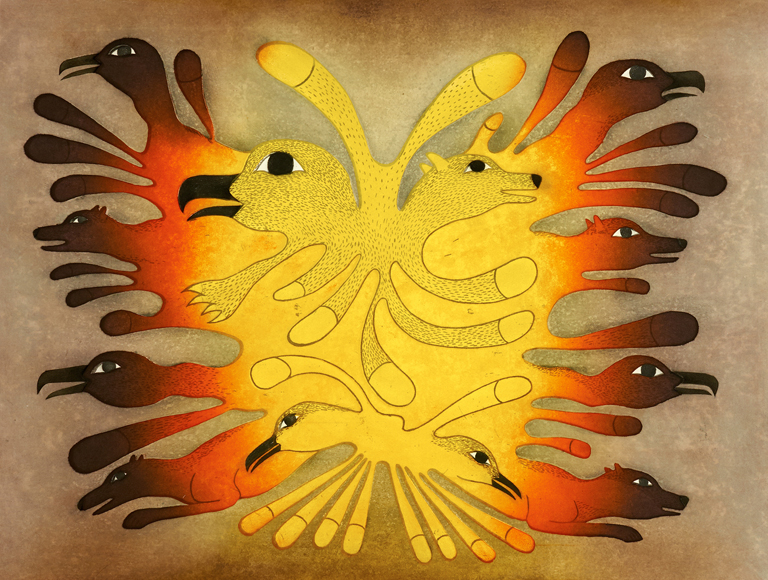 While undergoing treatment for tuberculosis in southern Canada, Kenojuak Ashevak discovered her remarkable artistic talent. Her drawings were bold and captivating, often portraying vibrant creatures, spirits and humans who hailed from the Arctic environment she called home. In Autumn Spirits, these familiar forms morph into one another, radiating outwards like a leaf whose colours are changing. Upon returning north to Kinngait (Cape Dorset), Ashevak was encouraged to experiment with printmaking at the West Baffin Co-operative, a community-focussed arts production space that is still in operation today. In addition to being a pioneer of Inuit art, Ashevak became a role model for women and a cultural ambassador, as she travelled internationally to exhibit her works. 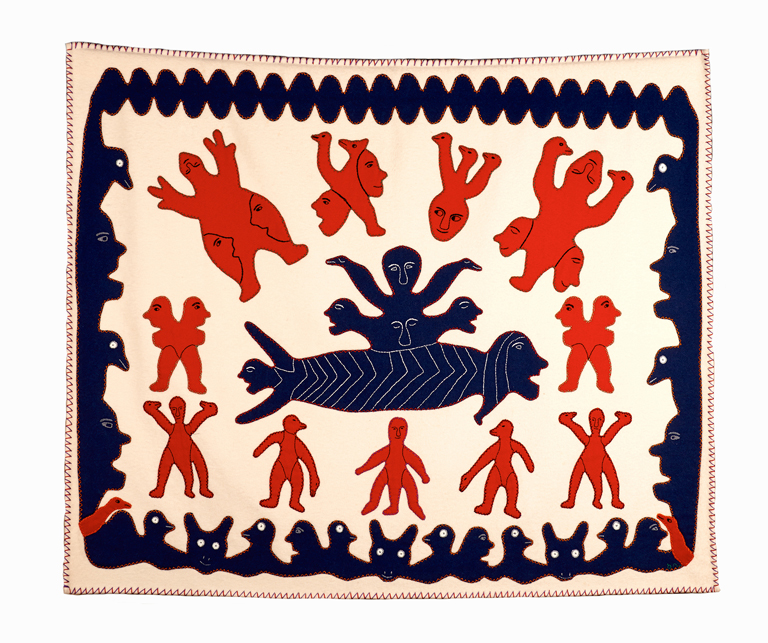 Hailing from a generation of artists who chose to settle permanently in Qamani’tuaq (Baker Lake) after living a traditional life on Arctic land, Irene Avaalaaqiaq Tiktaalaaq discovered a love for storytelling through drawing, printmaking and textiles at an early age. Inspired by Inuit legends passed on to her by ancestors, Avaalaaqiaq Tiktaalaaq creates eye-catching nivingajuliat, or stitched wall hangings, that often present common motifs and symmetrical compositions. Her piece, Giant Fish Giving Birth to Humans, likely represents one part of the story of Sedna, the Mother of the Sea. As shadowy figures intertwine to form a frame around the scene, the action in the centre seems to play out like a choreographed dance on a stage. 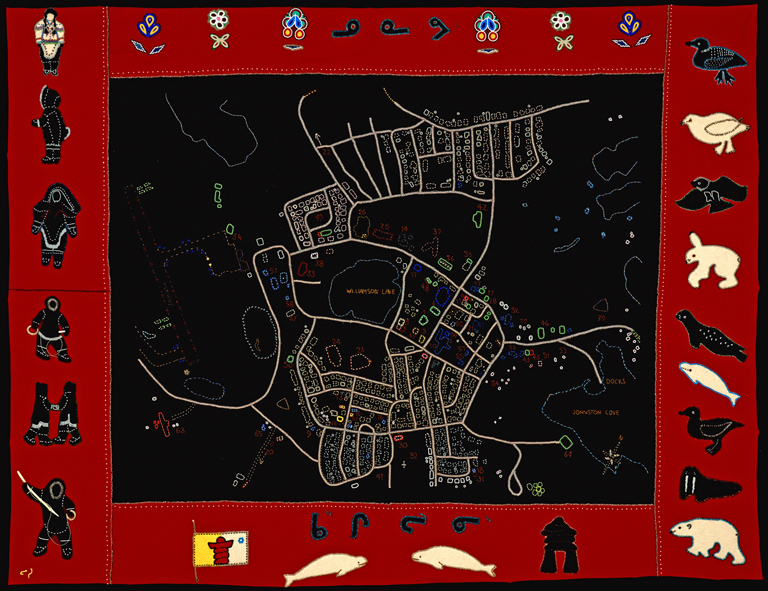 The incredible degree of patience and attention to detail that Lizzie Ittinuar lends to her craft as a seamstress is perfectly exemplified in her monumental piece, Map of Hamlet of Rankin Inlet, Nunavut. Using a large panel of black felt as her canvas, Ittinuar beaded a geographically accurate street map of her Arctic community, including identifying names, houses, lakes and the local airport. Composed of reflective beads, it portrays a night-time view of the hamlet, as if seen from a passing plane. Framing the map are beaded and felted images of local people, plants and animals, the Nunavut flag and the Inuktitut title of the work. It is through these characteristic elements that the experience of living in Rankin Inlet truly comes to life. 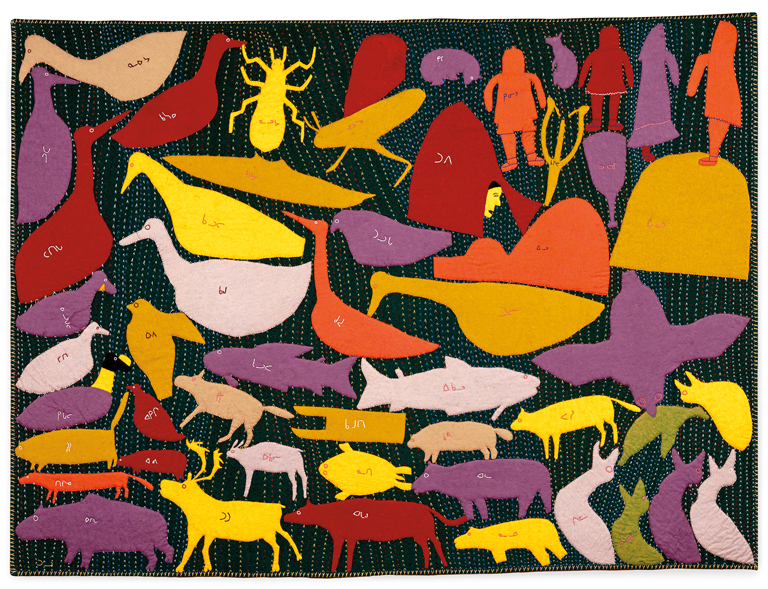 In her stitched wall hangings, or nivingajuliat, Marion Tuu’luq explored her identity as an Inuk woman and notions of home. Capturing what it was like to transition between life on the land and life in a settlement, Tuu’luq emphasized the symbiotic relationships found among the people, animals and the Arctic environment they all share. In her piece, Untitled, Tuu’luq illustrated the sheer abundance of creatures surrounding a camp, even labelling some of them in Inuktitut syllabics (Inuktitut is an Inuit language). Scattered throughout the colourful scene are essential means of transportation, such as a sled and a kayak, perhaps referencing a forthcoming hunt.

About the Author:  Eleanore Mackie
Eleanore Mackie is a former Young Canada Works intern who worked with the Art Bank team during the summer of 2019 in partnership with the Inuit Art Foundation. A graduate of the master's program in Art History at Queen’s University, she is passionate about creating digital content for arts organizations that is accessible, inclusive, and playful.